Where to purchase a tiny crane…

A meaningful and inexpensive gift item that symbolizes longevity, good luck, and/or world peace. Handmade in the U.S.A. by artist Stacie Tamaki. 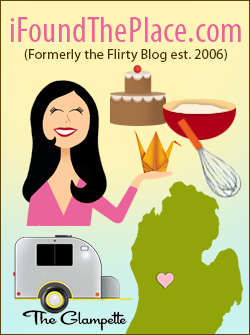 Or watch the Youtube video of her first television interview on The Jennylyn Show!

Last Saturday I spent the day on Division Ave. S in downtown Grand Rapids for the annual Art.Downtown event. It’s kind of like a mini ArtPrize except there is no voting/contest aspect and it only lasts for a single day from noon to 9:00 PM. 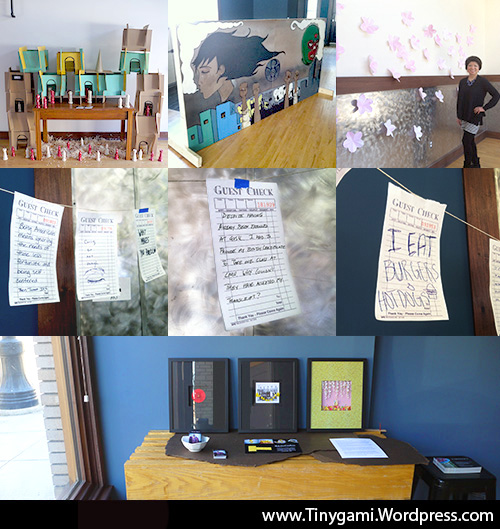 There were four artist’s sharing their work at the venue where I was invited to participate. Our curator, Zahara Avalon, also set up an interactive aspect asking people to write down on a restaurant order pad “What does it mean to be American?” The guests were then invited to hang their responses on string strung throughout the venue. The responses ranged from sobering:

“Despite having already been enrolled at GVSU… I had to provide my birth certificate to take one class at LMU. Why couldn’t they have accepted my transcript?”

To cynical:
“Being American means ignoring the needs of those less fortunate and being self centered. Then I Tweet it!”

To humorous:
“I eat burgers and hotdogs”

For me, Art.Downtown was quite different than ArtPrize mostly because instead of bringing mobiles of thousands of tiny cranes that represent Japanese traditions and customs I created three small framed pieces (11″x14″ frames) that told a very personal story. Would people like them as much?

I honestly didn’t know what to expect. I was in a pop-up space, a former (and future) restaurant that is currently unoccupied. That’s it to the left in the picture above. Would there be 20 visitors? 200? 2000? I didn’t count but can say I spoke to more than 20 and less than 2000 people and they were all great! I knew some, met many new art lovers, and had the most fun I’ve had, well, probably since ArtPrize last fall 🙂

The thing that made me happiest was that quite a few people who had seen my past ArtPrize entries commented they recognized me or my work and said that this exhibit was “so different,” “more personal/powerful/heartfelt,” and that they loved the framed format, that it “suited” the miniature scale of my work. I truly couldn’t have hoped for a better response. That people connected with my work and appreciated that these pieces had required more thought and vulnerability made me glad I took the chance and strayed outside of my ArtPrize-mobiles-comfort zone.

If you wanted to come but couldn’t make it, here is the exhibit and the words I printed onto small signs to set above each framed piece along with my artist’s statement and a renzuru diagram so that people would understand that the strand of cranes in the “Interned” piece was folded from a single sheet of paper.

This collection comes from a more personal place than the sets of 1000 miniature cranes I’ve made in the past. When people I know say “We should round them (people of MiddleEastern descent and/or Muslims) up and put them in a camp in the desert” or that my family was interned to “keep them safe,” I am reminded that I need to continue to speak out about the injustices imposed on American citizens when 75 years ago President Roosevelt signed Executive Order 9066 leading to the incarceration of over 110,000 Japanese Americans.

My reply is always that they are perpetuating the same fear and/or hatred that led to my family being placed behind barbed wire, with armed guards who would have shot them if they tried to leave, and losing over two years of their freedom. It was as wrong then as it would be to repeat the same injustice today.

My dad (a Private First Class in the United States Army) was also held behind barbed wire after his company was sacrificed to protect two retreating companies during the Korean War. He was captured on January 1, 1951 and held until August 6, 1953 after the signing of the Armistice. When he returned he faced racism even as a decorated POW-MIA veteran because he looked like the enemy, even though he was neither North Korean or Chinese.

And yet my parents saw past what they had each endured and held no racism in their hearts. They passed their tolerance and shared belief in treating people as individuals (not labeled groups) on to me. As a result my life is wonderfully rich, filled with a wide range of friends more diverse than they could have ever expected or hoped for me to have.

Never forget. Speak out. Be kind. Have faith.

American? This is how Japanese American citizens were commonly viewed by the government and public after Pearl Harbor. Instead of seeing individuals, they were reduced to (and judged by) the color of their skin.

Families were given less than a week to vacate their homes and report to a “relocation center” bringing only what they could carry in a single suitcase per person. This is my family in the camp at Heart Mountain, Wyoming where they were held for more than two years.

As a child I wanted to blend in. I often felt conspicuously Asian. Now? I look around and see people embracing diversity rather than tolerating it. Over time I’ve reached a point where I’m more interested in being authentic and sharing my heritage rather than ignoring or hiding it. There is beauty in every culture, my art is my way of expressing mine.

And just like ArtPrize, because I was making a few cranes to put on the display table thanks to the suggestion of a guest, several other guests asked for paper and made me things! I love that I always go home with more art than I arrived with when I participate in public events 😀 A huge THANK YOU to everyone who shared their talent with me!

To be honest I don’t really know that much about the Avenue for the Arts, the host of Art.Downtown. I will have to learn more about them on their website.

Thank you to Avenue for the Arts, my curator Zahara Avalon, and all of the guests, volunteers, and the artists I shared space with Carlos Gomez, Abigail Yoo, and Erick Picardo who made Art.Downtown such a fun and special event!